How much water does a football field need?

Considering a typical 6 month growing season in the Northeast as an example, a conservative estimate is approximately 1.5 million gallons of water in a single season. A grass football field will typically require at least an inch of water per week, or 60,000 gallons of water, according to the Sports Turf Managers Association.

In other climates, some fields could need 1 to 2 inches per acre, 1 to 3 times per week. This comes to roughly over 100,000 gallons of water per week.

How much does it cost to irrigate a football field?

The cost to irrigate a football field depends on the sprinkler system design, which depends on climate, field dimensions, and other factors. The largest portion of irrigation expenses is water, which varies depending on climate, soil, use of the field, and time of year. In addition to the amount of water that can vary, the price of water varies too.

According to the University of Tennessee, their costs to irrigate a football field field in 2005 were as follows:

How do sprinklers work on football pitches?

Sprinkler systems will work differently based on the kind they are— whether they’re mobile or inground, automatic, semi automatic, or manual. Automatic and semi automatic systems use either a programmed schedule, soil moisture sensors, or a combination of both to control the irrigation system.

The following are the most common types of football sprinkler systems.

Unlike natural grass football fields, artificial turf doesn’t require copious amounts of water to stay green and lush for the big game, which is one of its many benefits and what makes it a drought-tolerant surface that can stand up to hot climates like Arizona. However, artificial turf does need to be regularly sprayed with water to keep it clean and help keep fibers upright, as well as help keep it cool in hot climates. Water-Reel systems are a good option for synthetic turf irrigation: 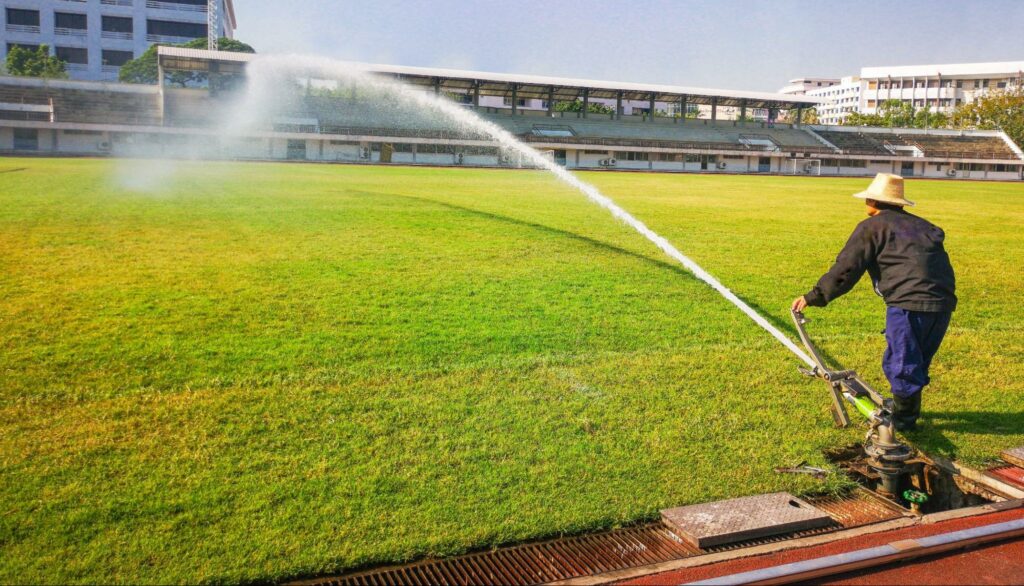 These are manually moved irrigation systems with impact sprinklers mounted on tripod stands or hoses. Solid set systems are inexpensive and are highly portable and flexible. However, they are labor and time-intensive, which might be a big issue during drought.

These systems work like solid set sprinklers, but the sprinkler is mounted on a tiny traveler. These systems are less labor-intensive, which reduces costs. The small traveling system also reduces the time to set up and move the sprinkler system.

The system drags a hose behind it and follows a wire. Irrigating the entire field takes three runs (each run takes about 3-4 hours).

Mainline pipe: 1.25″ (minimum).  If you plan to use in-ground systems in the future, install at least 2″ mainline pipe. Use a 1″ hose to feed the system from a coupler valve on the mainline pipe. 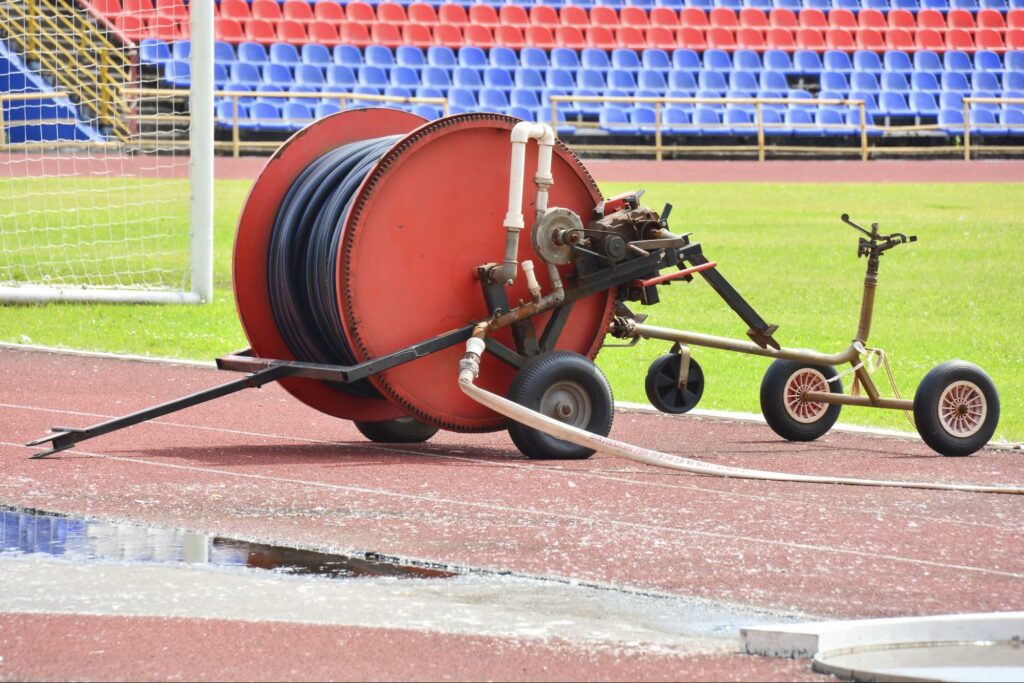 Large travelers comprise a drum wrapped with HDPE pipe on it. The sprinkler is mounted on a sled pulled with a utility cart. The drum revolves as the HDPE pipe winds around it to irrigate the specified area.

The water is delivered through a mainline to a hydrant, and a 1.5″ to 2″ hose feeds water to the system. Booster pumps can be fuel-driven and mounted on the traveler system.

Large travelers cover more ground per unit area than small traveler systems. The systems can irrigate a sports field in two runs and are highly portable.

They are the most expensive sprinkler systems but with the least labor requirement. These systems are not portable, and every field may need its own in-ground system.

These systems are highly automated. They leverage advanced control systems to schedule the perfect irrigation time based on weather conditions. You can remotely monitor and operate the in-ground systems, reducing time consumption and using the least water amount.

Apart from the control interface, all components are beneath the football field and nearly invisible.

With a subsurface drip irrigation system, also known as microirrigation, you install a pressure-regulated in-line emitter tubing in the root zone every 18 to 24″. This is a new way of irrigating sports turf under experimentation nationwide, and is already extensively used in agriculture. One of the many benefits of this system is water conservation, but it is the most expensive option since it’s the most sophisticated design.

Choosing a sprinkler system is about efficiency, water conservation, and convenience. Both in-ground and portable sprinkler systems promote lovely and green-looking football fields. But which is right for you?

Portable sprinklers are generally cheaper upfront than in-ground sprinkler systems. You can also use them to irrigate any area of the field you choose.

However, portable sprinklers are time-consuming and tiresome to use. You must change locations periodically to prevent oversaturating some field areas or underwatering some sections. For this reason, you can easily waste water if you are not careful.

Examples of in-ground systems are pop-up sprinklers that can be automated at a predefined time. The sprinklers are installed beneath the football pitch and pop up immediately after the valves on the water pipes open.

Unlike portable sprinklers, in-ground systems are less tiresome to use. That’s because they are in a fixed, strategic position, so you won’t have to move them around every now and then.

In-ground sprinklers with moisture sensors enable automatic irrigation. Hence, they require little human interaction. You can schedule the irrigation to spray the field with just enough water only when the soil has below standard moisture saturation. That way, you save water and time.

Unlike portable sprinklers that are cheap to buy, in-ground sprinklers are expensive upfront. However, you will spend less on maintenance.

Traveling sprinklers are semi-automatic systems that are powered hydraulically. These systems leverage water pressure from a hose to turn a series of gears that slowly turns the sprinkler’s wheels.

Traveling sprinklers are highly mobile and flexible with a low investment cost. However, you will need high water pressure to operate the unit. Plus, the sprinklers can easily cause runoff on the field.

On the other hand, long radius sprinklers can irrigate the field in shorter amounts of time than traveling sprinklers. Given their long radius, you can install these sprinklers along the field’s perimeter outside the turf or natural grass. Their long radius also reduces installation costs since you only need to install a few sprinkler heads and cover the same area as a traditional sprinkler layout.

Before installing a sprinkler system, here are the most crucial factors to consider:

The soil structure and texture greatly influence the soil’s water infiltration, permeability, and holding capacity. For example, soil with a compact structure has reduced water infiltration and percolation. This results in poor absorption, increased evaporation, and longer irrigation cycles, which translate to using more water.

Before setting up a football field sprinkler system, you need to know the soil’s texture, amount of moisture, and water holding capacity. That information will help you understand the correct water application rates, irrigation water management, and irrigation scheduling so that you use water beneficially on the field.

The sunlight and temperatures in an area influence evaporation and soil moisture content. Areas receiving sufficient rainfall throughout the year maintain adequate moisture in the soil. For this reason, such areas require little to no irrigation, reducing the complexity of the sprinkler system needed to maintain an evergreen pitch. If the rainfall is insufficient, the soil in the area may have inadequate moisture. In that case, you will need a more complex sprinkler system.

Costs vary depending on the design of the irrigation system and the amount of water the grass needs in its climate and soil conditions. Generally, the maximum cost for setting up a turf sprinkler system is lower than that of natural grass. That’s because turf requires less water and a less complex irrigation system than natural grass.

Avoid the cost and struggle of irrigating a football field with a sprinkler system, and get a turf football field instead. Artificial turf needs little water to keep it clean and cool to the touch, unlike natural grass, which needs thousands of gallons and inches of water to stay green and soft.
Start browsing our selection of high quality turfs:

Get in touch withTurf Factory Direct to learn more!