Starting a lawn overhaul can be a big endeavor, so before you start, you want to make sure that the conditions are right for the replacement. Turf Factory Direct are the experts on turf and can help you navigate the complexities of replacing a lawn.

There are a number of reasons to replace a lawn:

END_OF_DOCUMENT_TOKEN_TO_BE_REPLACED

When you’re thinking about installing artificial turf, you want to make sure that you’ve got the right thickness for the job. But that’s not the only consideration or concern. In this guide, we’ll take you through the appropriate thicknesses of turf, as well as how you can install turf properly, or at least purchase the right turf for installation.  END_OF_DOCUMENT_TOKEN_TO_BE_REPLACED

Everyone loves the idea of a lush green lawn that is the envy of the neighborhood. Well-maintained lawns increase the value of a home, and the image of children and pets frolicking through the yard is a charming one.

END_OF_DOCUMENT_TOKEN_TO_BE_REPLACED

The match of the century has arrived—artificial grass vs. natural grass.

To the uninitiated, natural grass might sound like the right choice, but that couldn’t be farther from the truth. Artificial turf and grass not only successfully simulate the feeling and appearance of grass, they often outperform it in appearance, comfort, durability, and longevity.

Still skeptical? Well, don’t worry. We’ll walk you through it.

END_OF_DOCUMENT_TOKEN_TO_BE_REPLACED

Even in an era where water is becoming precious and time for yard work is hard to find, the pristine image of a perfect green lawn is still a well-sought priority. Artificial turf is becoming an increasingly popular option. While many people recognize artificial turf as an option for athletic fields and putting greens, it’s also a great option for home landscaping, even in homes with pets. There are plenty of uses for artificial turf. Here are the top three: END_OF_DOCUMENT_TOKEN_TO_BE_REPLACED

Seasonal allergies are bad enough, and you shouldn’t have to confine yourself indoors just to escape your allergy symptoms and the pollen that causes them. The reality for many allergy sufferers is that the best way to help soothe your allergy symptoms is by reducing the amount of pollen in your environment by selecting trees and greenery that don’t produce much of it.

Some of the most common pollen that causes seasonal allergy symptoms come from flowers, grasses, and trees. The worst allergen producer of all is grass. Fortunately, Turf Factory Direct makes it easy for allergy sufferers to reclaim their lawn. 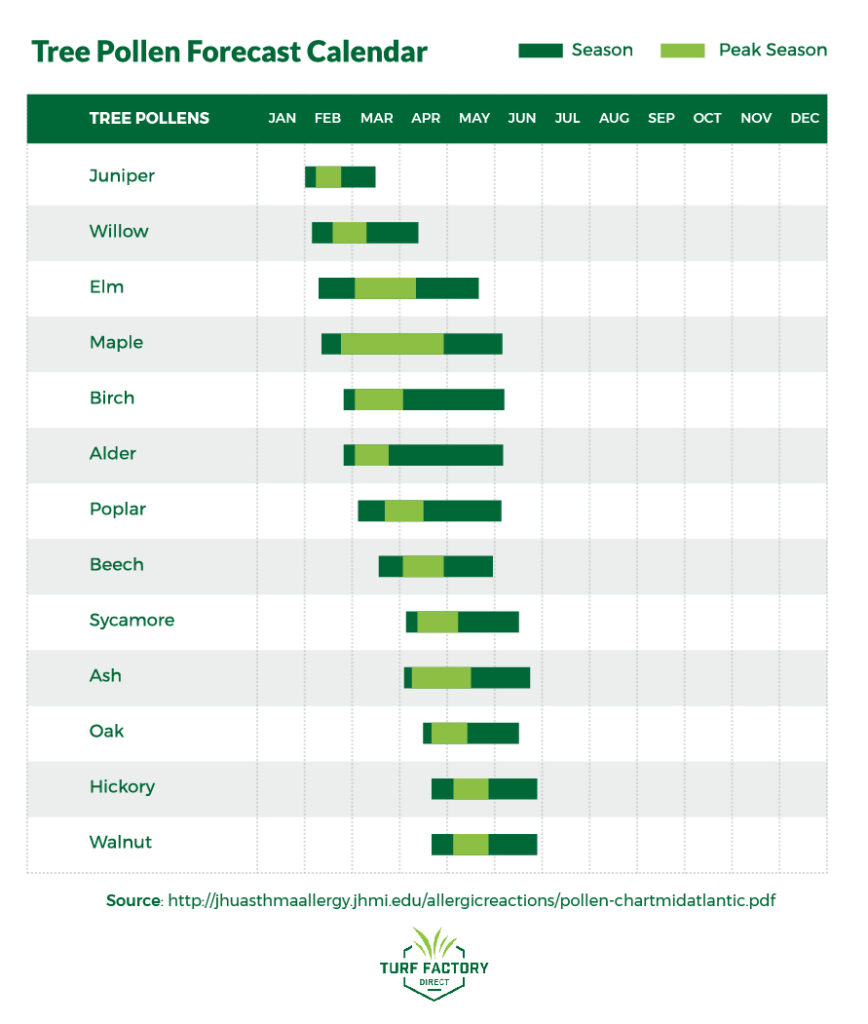 What are tree pollen allergies?

Most pollen that causes allergic reactions can trace their origins to trees, weeds, and grasses. Seasonal allergies are caused by pollen. Pollen is tiny grains that plants produce to fertilize other plants of the same species that are released into the air during spring, summer, and fall. Pollen can trigger a reaction in people and animals known as seasonal allergic rhinitis, also called hay fever and cedar fever.

The presence of pollen in a tree is a matter of the tree’s pollination method. Most trees are wind-pollinated, which means they produce a light, dusty, pollen that is easily windborne. Wind-pollinated trees are the likely cause of allergy symptoms, rather than those that are primarily pollinated by bees and other insects, because the wind blankets large areas with pollen to ensure pollination.

Most of the common conifers – including pines, spruces, and firs – rely on wind pollination, and so do many broadleaved trees, including aspens, cottonwoods, oaks, ashes, elms, birches, and walnuts.

Since only the male trees produce pollen, and the female trees do not, avoiding planting male trees can be one effective way to reduce allergy symptoms in your immediate area.

You should also avoid planting monoecious trees because they have both female and male parts so they produce pollen. Examples of monoecious trees include fir, birch, hickory, pecan, chestnut, cedar, hazel, beech, walnut, sweetgum, white cedar and hemlock.

Here are a list of the trees that are more likely to cause allergy symptoms:

Here are some examples of female trees to help reduce allergy symptoms:

Additionally, trees that rely on pollination by insects, birds, and bats, often produce less pollen because their pollination process is direct and efficient. The animal-transported pollen also tends to be sticky, heavy, and coarse, so it’s less likely to become windborne and trigger allergy symptoms.

Examples of insect-pollinated trees include:

These trees have the added bonus of delicious fruits in addition to reduced allergies symptoms!

In addition to being hypoallergenic, turf is durable, versatile, and attractive, so much so that it can increase property value and help you sell a home fast. Artificial grass isn’t just  lawns and sports turf either, turf is great for kids’ playgrounds, pets, and creative landscaping projects. Turf can even go on roofs, decks, concrete, or soil. At Turf Factory Direct, we provide turf to fit any and every need. Get in touch with us to learn more.

Many folks suffer from seasonal allergies, and often seek different ways to escape their symptoms — pills, sprays, injections, masks, and even avoiding going outside altogether. And for good reason — sneezing, coughing, congestion, and red, itchy, watery eyes — allergies are miserable.

But, what are seasonal allergies anyway?

Seasonal allergies are caused by pollen. Pollen is tiny grains that plants produce to fertilize other plants of the same species that are released into the air during spring, summer, and fall. Pollen can trigger a reaction in people and animals known as seasonal allergic rhinitis, also called hay fever. Most of the common pollens that create seasonal allergy symptoms come from trees and grasses, but there are plenty that are produced by flowers too.

Gardeners and homeowners are left wondering what they can do to reclaim their lawn and enjoy it in the spring and summer again. Turf Factory Direct has the answers to make your lawn more enjoyable if you suffer from seasonal allergies.
END_OF_DOCUMENT_TOKEN_TO_BE_REPLACED