While artificial turf is one of the best playing surfaces for many sports, it is not as common in professional baseball as it is in other sports, such as football stadiums and soccer fields. Many are curious about what artificial turf costs and how it might affect play, so this article will help answer questions and provide more information about turf as it relates to baseball. 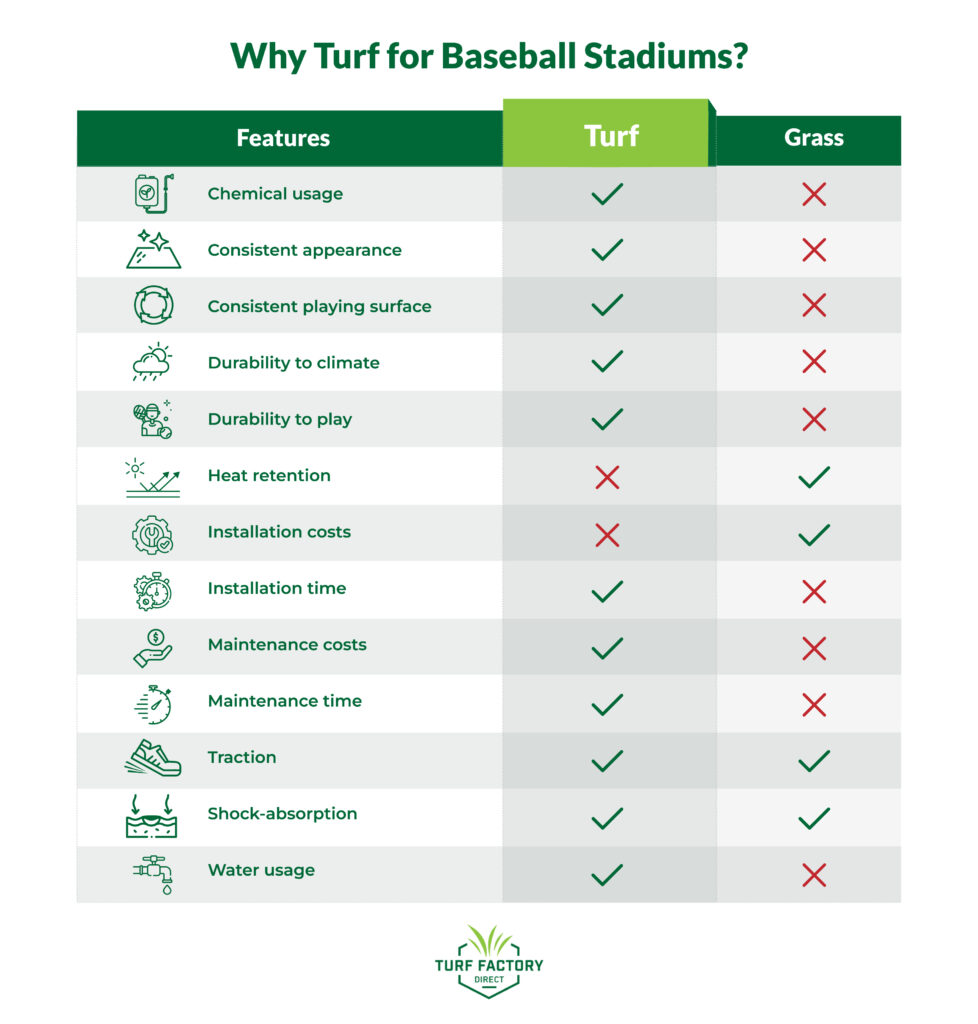 Artificial Turf Fields in the MLB

Currently, there are five fields in the MLB that use artificial turf:

There are plans for others to potentially make the switch, but artificial turf has been a controversial topic in baseball, which has many grass traditionalists.

Artificial Turf Fields in The NCAA

There’s plenty of questions to be had about artificial turf and baseball, and we have answers.

How much does artificial turf cost for a baseball field?

The answer is simple: maintenance costs and hours of use. Baseball stadiums that use artificial turf are able to be open year-round, no matter the weather. Additionally, they have lower maintenance costs, around $5,000 a year, compared to the $20,000 a year of natural grass.

Some people have expressed concerns over the health and safety of players on synthetic turf sports fields. The greatest concerns are that of turf’s heat retention in hot climates, and chemicals related to the crumb rubber infill. Artificial turf technology has grown astronomically safer with each passing year and development of new infills, fiber types, and more. Now is a better time than ever to install safe and well-functioning artificial turf for baseball. This is especially true when comparing synthetic turf to grass on baseball fields in hot climates.

According to the Wall Street Journal, medical personnel for the Arizona Diamondbacks worried that the dead sod might injure players, causing them to take a fall. Turf’s durability, traction, and shock-absorption make it a safe surface for players.

What kind of materials do turf baseball fields use?

Artificial turf commonly has several different types of materials in its construction. The base underneath the turf is commonly gravel or sand. Artificial turf fibers are commonly made of nylon, polypropylene, polyethylene, or other synthetic materials. Following that, installers pour infill between the fibers of the turf to provide additional cushion and support. Infills range from silica sand on the expensive end to crumb rubber on the cheaper end.

What do players and teams have to say about artificial turf?

Many players complained about artificial turf in the days of early adoption, but now, as technology has improved, many cannot tell the difference, some even preferring it or find it to be safer than traditional grass fields. One of the many benefits of artificial turf playing fields is the consistency of ball roll and ball bounce.

Depending on where a team is playing, there are many drawbacks to a natural grass playing surface. For instance, at Chase Field, home of the Arizona Diamondbacks, Chief Executive Derrick Hall found himself getting a lot of complaints about the field, which hardened as the season progressed, causing the ball to bounce high and fast in a way players were not used to. The installation of turf solved this problem since it doesn’t fluctuate with climate conditions as much as grass does.

Where can I find out more about artificial turf?

Turf Factory Direct sells artificial turf for sports fields, batting cages, indoor facilities, and more at wholesale prices, so you can be certain that you’re getting the best deal on the highest quality turf. We stock every variety of turf. Start browsing our inventory today, or get in touch with us with any questions.