Artificial turf is an extremely useful and versatile material that is used in everything from soccer to baseball. But, how does it handle hard-hitting sports like football? It’s a good question, and the answer is: very well. Here, we’ll answer your artificial turf questions as well as providing info about the good ol’ National Football League’s use of it.

How many NFL stadiums have artificial turf?

The short answer is 14 stadiums. The longer answer is that of the 30 NFL stadiums in the U.S, 14 have synthetic turf, while 16 have a natural grass playing surface.

The 14 NFL stadiums with turf are: 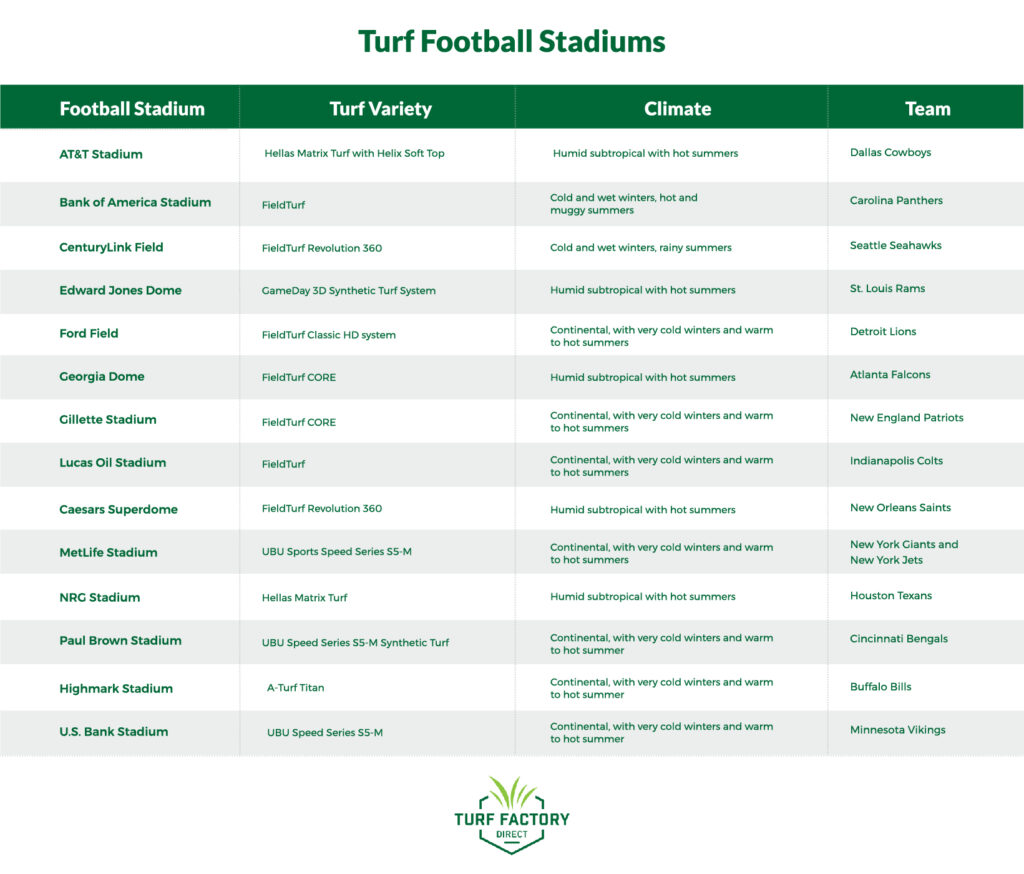 What kind of turf is in those stadiums?

FieldTurf is the most popular of the five turf distributors among the 14 turf stadiums. The turf used in different stadiums is often dependent on both the climate and the stadium design. Here’s an overview of each stadium and the team, artificial turf type, and climate related to it.

Why turf for football stadiums?

While there are many reasons to consider artificial turf for a football stadium, it’s important to balance a number of factors. Artificial turf technology has dramatically improved over the past few decades, and while innovation continues, turf is becoming increasingly safer and more protective for players (which was not always the case).

Football fields get the wear and tear between players tackling and cleats running, jumping, and kicking, let alone exposure to UV and air pollution. Since turf fibers are synthetic, they can’t be crushed, torn, burned, or smothered the same way natural blades of grass can. Turf stays green and lush after hours of play over the span of years.

Turf provides a consistent playing surface, which grass has to be carefully monitored for to be free of divots, gopher holes, and other issues. Natural grass requires a lot of maintenance to prevent brown and yellow spots, bald spots, or soggy spots, which can have a negative effect on the outcome of the game, and the reputation of the stadium and the team. Beyond the occasional refill of infill and spray of water, you don’t need to do much to keep it safe and level for players.

Players and spectators spend a lot of time looking at the field, which is why the reputation of the stadium and the team rely on its appearance to be attractive, lush, and green. With turf you never have to worry about bald, yellow, or brown spots.

No matter what type of artificial turf you’re planning to use, Turf Factory Direct what you need to make the best sports field possible. Get in touch with us or start browsing products today that your favorite NFL team uses!