The Worst Flowers for Seasonal Allergies

Many folks suffer from seasonal allergies, and often seek different ways to escape their symptoms — pills, sprays, injections, masks, and even avoiding going outside altogether. And for good reason — sneezing, coughing, congestion, and red, itchy, watery eyes — allergies are miserable.

But, what are seasonal allergies anyway?

Gardeners and homeowners are left wondering what they can do to reclaim their lawn and enjoy it in the spring and summer again. Turf Factory Direct has the answers to make your lawn more enjoyable if you suffer from seasonal allergies. 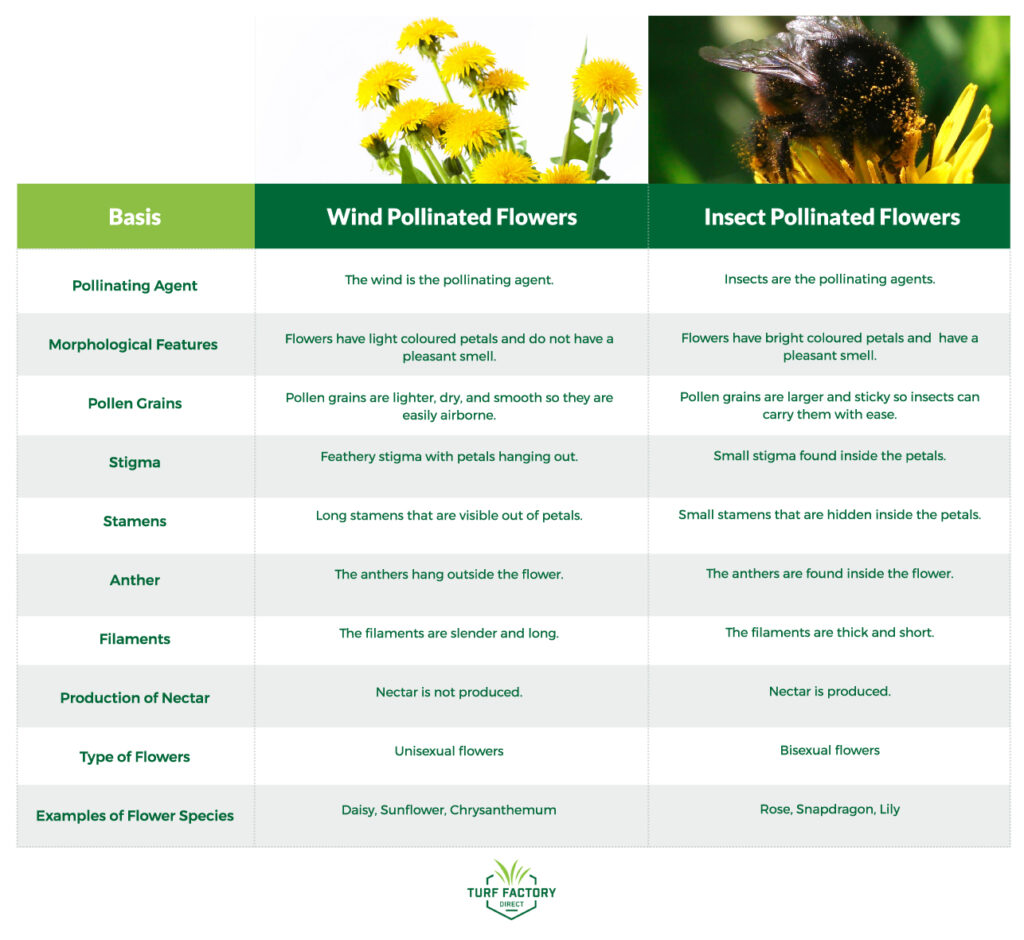 Flowers to Avoid: The Pollen Producers

The reality for many allergy sufferers is that the best way to help soothe your allergy symptoms is by reducing the amount of pollen in your environment by selecting flowers and greenery that doesn’t produce much of it.

Many flowers, shrubs, trees, and grasses make very little or even no pollen. And some species produce it only in certain plants. Removing the pollen producing male plants and replacing them with pollen-free females can reduce allergies. Male flowers are recognizable by their lack of stigmas or undeveloped stigmas. Female flowers have well-developed ovaries and stigmas and lack developed stamens.

However, if pollination is achieved with the agency of the wind, it matters little if the plant has male flowers. A male flower will contribute to allergies depending on whether its natural pollination system is wind-pollinated or insect-pollinated. The flowers that tend to be the worst for allergy sufferers are those with light, dusty pollen that is easily transported by the wind. If the system depends on insects for pollen movement, very little, if any, pollen will be air-borne and affect people.

Wind-pollinated plants are generally more likely to cause allergy symptoms than those that are primarily pollinated by bees and other insects, because the wind blankets large areas with pollen to ensure pollination. Rather than only planting female flowers instead of male flowers, gardeners have a better chance of reducing the effects of pollen by planting insect-pollinated, rather than wind-pollinated, flower species in the landscape.

The amount of pollen can differ from flower to flower, by region, and by season. Some of the most common flowers known to release allergens include:

As a general rule, insect-pollinated plants have brightly colored, attractive flowers. Their heavy pollen sticks to bees and butterflies and is not likely to become airborne. These allergy-friendly flowers have the double benefit of usually being quite attractive to bees and other pollinators like butterflies and hummingbirds, which are vital to the ecosystem. The same flowers that attract pollinators are usually also found attractive to people too, so having them in their garden can increase curb appeal, which can help sell a home fast or increase property value.

Additionally, the more hybridized the plant, generally speaking, the less likely it will have a high level of pollen, and the less irritating it will be to those with seasonal allergies. The good news is that the showiest flowers are often the most hybridized, which ensures a good variety of spectacular plants to choose from:

While sunflowers usually produce allergens as wind-pollinated flowers, the Apricot Twist and Joker varieties are unique in that they are insect-pollinated sunflowers, and therefore don’t produce air-borne pollen to irritate allergies.

The only surefire way to reduce the amount of allergens around your home and garden is to invest in something that doesn’t produce any pollen at all: artificial turf. Artificial turf isn’t just great at reducing allergy symptoms, either. Turf saves water, prevents flooding and drainage issues, and can also help reduce instances of bugs on your patio.

Turf Factory Direct is the foremost supplier of artificial turf at competitive prices and a high degree of quality. We’ve been in the business for a long time, and if you’re looking to change the look of your landscape, we can help. Get in touch with us today, or start browsing our products now.